CCC determines whether your destination volume will be bootable and indicates any configuration concerns in the "Cloning Coach" window. If you see a yellow warning icon in the Task Plan header, you can click on that icon to see these concerns. CCC will also present these concerns to you the first time that you configure a backup task to any particular destination volume.

For improved detachability, macOS will unmount any non-internal volumes that are attached to the system when you log out. So, for example, if you log out of your computer while a USB or Thunderbolt hard drive enclosure is attached, you can detach those hard drive enclosures from the system without having to manually unmount them first. This is a good thing — it would be annoying if you had to log back in to your system just to eject a drive. The downside of this, though, is that if you have a CCC backup task that runs when no user is logged in, the destination volume may be unavailable.

"My disk is already formatted APFS or HFS+, why am I getting this warning?"

If your disk is not partitioned using the scheme recommended and supported by Apple, CCC will indicate a warning when you start the backup task such as:

"You may have difficulty booting from this destination volume, the underlying disk is not partitioned with a partitioning scheme that Apple recommends for Intel Macs.", or when CCC attempts to convert the destination to APFS after installing macOS 10.15 Catalina, CCC may be unable to convert the volume from HFS+.

I have a full-volume backup in a folder or a disk image, but I don't have a bootable backup. How can I restore everything?

CCC makes bootable backups specifically to avoid this kind of situation. When you have a bootable backup, you simply boot from that, then restore everything to a replacement disk or the original disk. One step, minimal time, couldn't be easier. Occasionally people get into this sticky situation though -- I have a backup of everything in a disk image or in a folder on the backup volume, there's a clean installation of macOS on my replacement disk, now how do I get everything back to the way that it was before?

What makes a volume bootable?

Bootability comes down to a few simple rules:

Note: When backing up an APFS-formatted volume with CCC 5.1 or later, CCC will copy files from a read-only snapshot of the source volume. The subject of this article is not applicable in those cases.

Databases are proprietary file types that often cannot be backed up in the conventional manner. In CCC, you can leverage a preflight shell script to perform an "out of band" backup of various databases using database-specific tools. The CCC backup task will subsequently back up the database archive files, from which you could restore the database at a later time.

The following pre-clone shell script will dump the contents of any MySQL databases. In the event that your standard backup of the database doesn't open, you can later restore it from the dump.

When I boot from my backup, Little Snitch reports that its rules have been replaced by a different version. Why, and how can I avoid this?

According to ObDev developers, it is crucial for Little Snitch to avoid unnoticed ruleset changes. Little Snitch therefore has numerous mechanisms to detect whether it is using the exact same ruleset file, as in, on the same volume and at the same physical address on that disk. This sort of mechanism makes it impossible for Little Snitch to use the ruleset on the booted backup volume without physical intervention from a user at the system (thus the dialog asking if it's OK to use the current version of rules or to use a default ruleset). 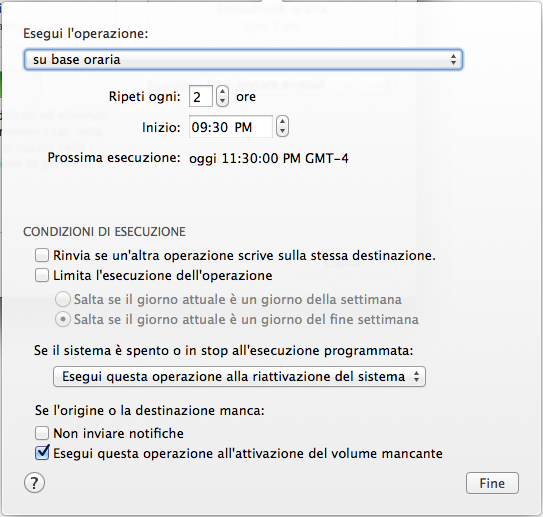