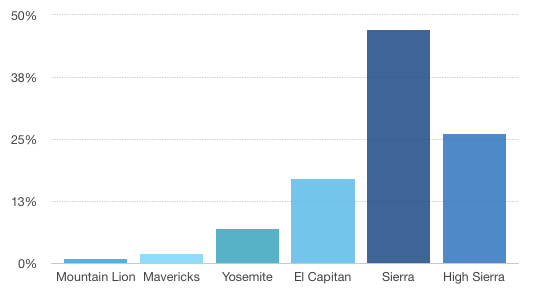 I don't want to be the guy that hoists a "Mission Accomplished" banner too early, but looking back at the last several weeks, we were more prepared for this OS release than any major new OS in the past. We've seen great success making HFS and APFS bootable backups on High Sierra. Our statistics show thousands of confirmed High Sierra bootable backups using both APFS and HFS (roughly 40/60 split), and based on user feedback on our Help Desk, we're seeing very few reports of High Sierra-specific concerns.

We addressed many of the upgrade-related questions in our Everything you need to know about Carbon Copy Cloner and APFS Knowledge Base article, but one question comes up most frequently: "If my startup disk is APFS now, do I need to erase the backup disk as APFS?" Along the same lines, "If my backup is HFS+ formatted, can I restore that to an APFS disk?" Unlike some other backup solutions, CCC is format-agnostic – CCC can happily accommodate any combination of APFS and HFS that you throw at it. If your pre-High-Sierra backup disk is formatted as HFS+, you can leave it formatted as HFS+ and resume smart updates with Carbon Copy Cloner. Should you need to restore from that backup to your APFS-formatted startup disk in the future, CCC 5 can do that. APFS, HFS, encrypted, not encrypted – whatever format you want on either end of the backup is perfectly fine with CCC and comprehensively tested.

Back in June my thoughts about the High Sierra upgrade boiled down to two things: Wait for at least the .1 update, and that a lack of documentation on the new APFS filesystem makes me wary of third-party solutions that leverage its new features (like snapshots). I also suggested waiting to convert to APFS, but that suggestion became moot because conversion is not optional. With a month of public exposure to High Sierra behind us, I feel about the same, though I'm more optimistic now than I was at the beginning of the summer. Once Apple has released the 10.13.1 update, I will be recommending the High Sierra upgrade for anyone that is already interested in making the upgrade.

I have had some reservations about APFS encryption, but I think the issues we've seen are entirely limited to high-end RAID hardware. If you have RAID storage, I recommend that you consult the hardware vendor to determine if they have tested and can support the use of APFS before applying that format to your own hardware. I had FileVault enabled on my own system prior to upgrading to High Sierra, and now that it is APFS Encrypted, I haven't noticed any problems specific to APFS encryption.

My only other concern relates to third-party SSDs. We haven't received any reports from our own users of any problems with third-party SSDs, however one of our development systems did have an issue back in June with an OWC Aura SSD (right off the bat at Apple's developer conference! It's not easy being an early adopter. And yes, CCC backup to the rescue ?). OWC lists the affected products here, and they report that they're working closely with Apple to resolve the issue. So if you have a third-party SSD in your Mac, do a little bit of research on compatibility before applying the upgrade.

We’re still looking forward to the possibilities of APFS snapshots. We’ve been testing snapshots, but as I said back in June, the documentation for them is still lacking. As soon as we think they’re good to go, you’ll see them in CCC. (But don’t worry, we won’t subject CCC users to beta testing the functionality until it’s good and ready!)