How do I restore files from the _CCC SafetyNet folder?

CCC's SafetyNet folder ("_CCC SafetyNet") is excluded from CCC's backup tasks by default because it contains older versions of modified files, and files that were deleted from the source volume. Typically when you restore data from your backup volume, you will want to avoid restoring the items in this folder, choosing instead to restore the most recent backup of your files.

If there is something that you would like to restore from the CCC SafetyNet folder, a drag and drop restore in the Finder is usually the easiest way to do so. If you would like to restore many items, or merge them into an existing folder, choose "Choose a folder..." from CCC's Source selector and choose the folder from which you would like to restore. If you choose the _CCC SafetyNet folder as the source, note that the full path to your archived files will be preserved, e.g. 2014-09-27 (September 27) 14-11-18/Users/fred/Documents/some file.pdf. In most cases, you will want to choose a subfolder within the archives folder as your source. Likewise, choose "Choose a folder..." from CCC's Destination selector and select the specific folder that you want to restore items into.

Why can't I open some files in the _CCC SafetyNet folder?

When CCC evaluates the items on your destination and determines whether they should be archived or left in place, it does so on a file-by-file basis. This poses a challenge for bundle files — files that are actually a folder of files, but presented by the Finder as a single file. As a result, bundle files (e.g. applications, some types of libraries, some custom file types) may appear in an incomplete form within the CCC SafetyNet folder.

Unless all of the components within a bundle file are modified, only the items that have been updated will be present. Incomplete bundle files are generally not useful on their own, but their contents can be. For example, if you accidentally deleted a photo from your iPhoto library, you would be able to recover that lost photo from the archived iPhoto library bundle. To reveal the content of an incomplete bundle file in a CCC SafetyNet folder, right-click (or Control+click) on the item and choose "Show package contents" from the contextual menu.

Can I restore a previous version of the OS using one of the archives in the _CCC SafetyNet folder?

While it is possible to recover an older, complete version of a bundle file from the CCC SafetyNet and complete backup (e.g. by overlaying the incomplete archived bundle file on top of the current backup of the bundle file), this is generally too tedious of a task to be practical for application and OS restores. CCC's SafetyNet feature is not intended to provide a method for rolling back software updates, OS restores should always be done from the complete backup at the root level of your destination. If you would like to make "snapshot" backups of your OS, choose Choose a folder... from CCC's Destination selector and choose a folder on the destination volume for the purpose of a one-time backup.

I deleted files from my startup disk to make more room, but now it's hard to find some of those files on my backup volume

This generally isn't a concern for ordinary "flat" file types, but it it can be a concern for certain applications that store lots of files in a single, monolithic-appearing container file. Some applications offer highly customized interfaces to access a specific file type. iPhoto, for example, allows you to manage tens of thousands of photo files. These files are all stored in a proprietary bundle file in your home folder, but because photos are so easy to organize within iPhoto, many people don't consider how those files are organized on the hard drive. Usually you really don't have to either. That is, of course, until you can no longer use iPhoto to access your photo files, and that's exactly what happens when you delete files from your iPhoto library, abandoning them to the SafetyNet folder on your backup volume.

If you have a habit of periodically deleting photos, music, or movies from iPhoto, iTunes, Aperture, or any other application that uses a proprietary bundle file format so that you can "free up some space on your startup disk", consider how those files will be organized on the destination. Specifically, keep in mind that you use a very elaborate application to access these files on the source volume, but you will only have the Finder to access these files on the backup volume.

CCC can't reorganize your deleted files in a way that's logical to you, it can only place them at the same path in the _CCC SafetyNet folder as they were on the source volume. For files buried in a bundle file on the source (as is the case for iPhoto, for example), this means that the files will be buried in bundle files in various time-stamped archive folders on the destination. These files will also be subject to deletion if you configure CCC to periodically prune the contents of the SafetyNet. In short, simply archiving deleted files from applications such as these isn't going to be the best way to store these items long-term if your goal is ultimately to keep them.

When you want to free up some space on your startup disk, consider this approach instead, using iPhoto as an example:

Not all applications have this kind of internal Trash folder, so be sure to see how it works for other applications before applying these exact steps. The general idea, though, is that you should deliberately archive the items that you're removing from your source volume in a way that makes sense to you rather than passively allowing CCC to archive them in a manner that makes sense to the computer.

Why can't I delete some items from the SafetyNet folder? The Finder says that some items are in use.

In OS X El Capitan, Apple introduced a new feature called System Integrity Protection (SIP). SIP works by preventing any user from deleting certain protected system items on the startup disk. If you boot your Mac from a backup volume and restore system files to your startup disk, CCC will place outdated versions of those system files into the SafetyNet folder. These modifications are allowed because CCC is making changes to that volume while it is not the current startup disk. When you restart your computer from that destination volume, however, SIP re-engages and may then prevent you from deleting the protected items that were placed into the SafetyNet folder. If you attempt to delete these items, the Finder will report that they cannot be deleted because they are in use, or because they are protected. If you try to delete these items in the Terminal application, you'll get a more distinct error message, "Operation not permitted". 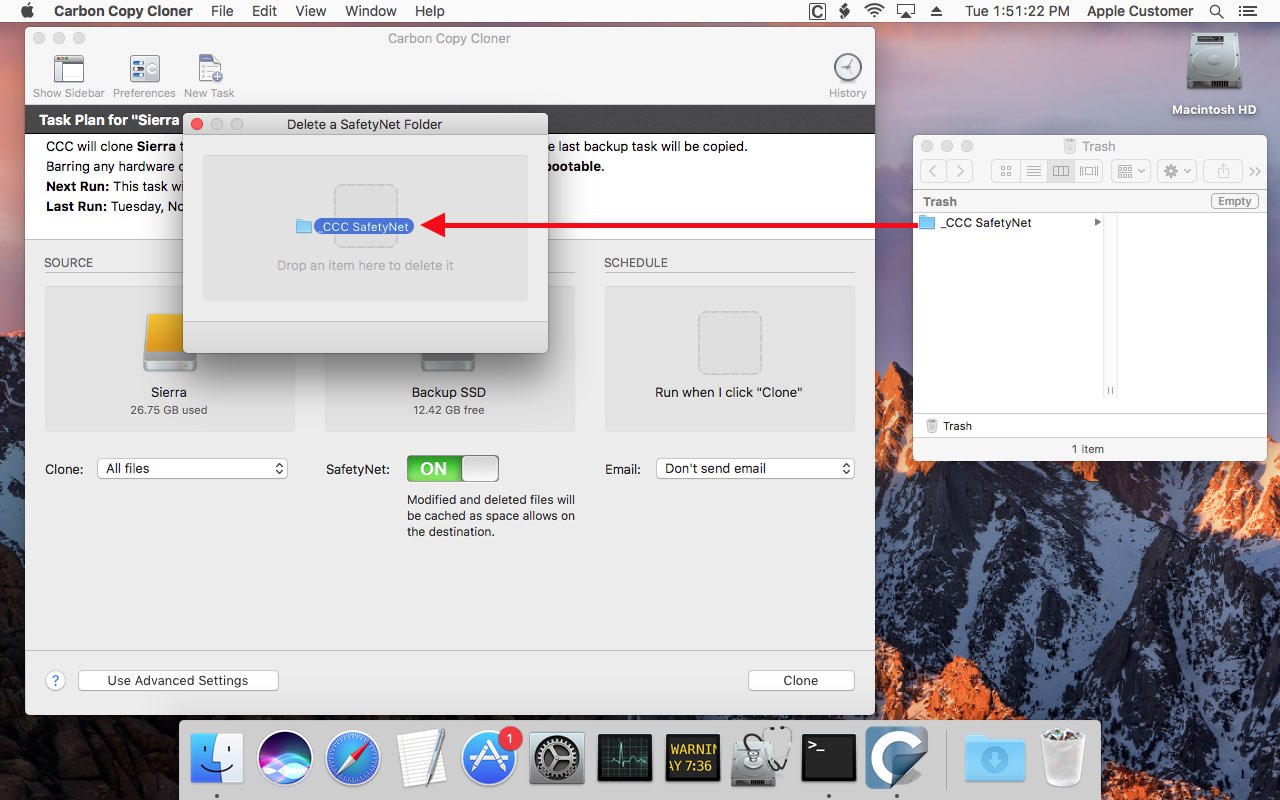 If the item you're trying to remove is on your current startup disk, CCC will move the item to the root of your startup disk, then instruct you to boot your Mac from some other volume (e.g. your backup disk). Once booted from the backup volume, you can repeat the same steps with CCC to remove the SafetyNet folder.

If you're still having trouble after trying that, don't hesitate to ask us for help.