Why does Finder prevent me from viewing the home folder on my backup when it's attached to another Mac?

We are currently tracking a Finder bug in which the Finder incorrectly determines your access to some folders. The issue occurs when an "access control list" is applied to a folder and when ownership is disabled on the backup volume. Ownership is disabled by default when you attach your backup volume to a different Mac, and the folders in your home directory each have an access control list, so we often see this problem when trying to access the contents of the home folder on a backup disk when that backup disk is attached to some other Mac. Here's what you might see in the Finder:

Naturally, you might think, "OK, I'll just correct the permissions". But, if you select one of those folders and choose "Get Info" from the Finder's File menu, you'll discover that you already have Read & Write privileges for that folder! 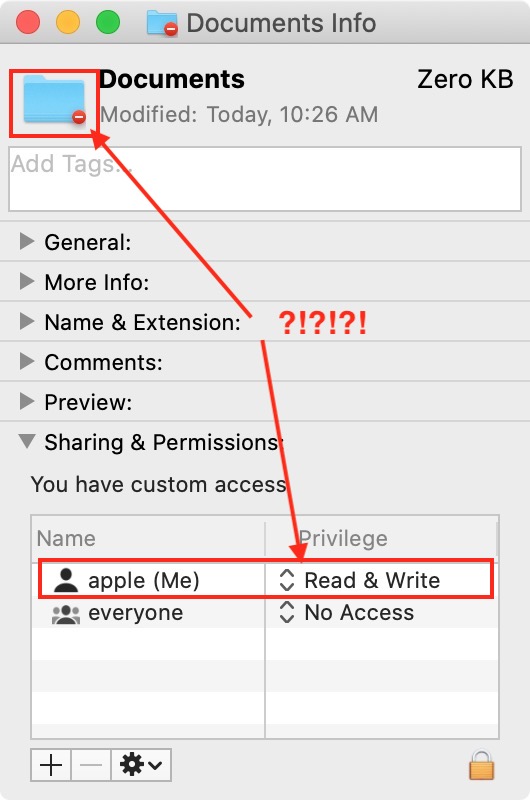 The information in the Get Info panel is contradictory — on one hand, you have no access to the folder (indicated by the universal "no access" badge applied to the folder icon). According to the Sharing & Permissions section, though, you have full read and write access. If you try to access the contents of that folder via the Terminal, you can view and open the folders just fine. In fact, you can even reveal items nested within these folders in the Finder, with a really odd artifact!

How can I set up my backup task to regularly share files between two Macs?

If you're trying to set up a backup task that allows you to regularly transfer files between two Macs, then a better solution is to set up a folder-to-folder backup:

Your account on the second Mac should then have no trouble accessing the contents of that new folder on the backup disk.

Can I keep my backup bootable, yet also occasionally access my files on another Mac?

If your goal is to create a bootable backup that you occasionally use to transfer files between Macs, and if enabling ownership on the volume does not resolve the access issue, then we have developed a workaround that will avoid this Finder bug. Download this script instead, open it in the Script Editor application, then click the Run button in the toolbar. When prompted, select the affected folders (or your entire home folder) from the backup volume. This script will remove the access control entries and set your current user account as the owner. Keep in mind that this change will be reversed when you attach the disk to the original Mac and re-run the backup task, so keep the script handy if you're using this disk between Macs frequently.