This article's content is not relevant when snapshot support is enabled on an APFS-formatted destination volume. See Toggling snapshot support and setting a Snapshot Retention Policy for more information on SafetyNet Snapshot retention.

Carbon Copy Cloner will move previous versions of modified files, as well as files deleted since previous backup tasks to a SafetyNet folder at the root of the destination. If left unmanaged, this SafetyNet folder would eventually consume all free space on your destination volume. To prevent that from happening, CCC prunes the contents of the SafetyNet folder at the beginning of each task if free space is less than 25GB. This limit is automatically adjusted if a 25GB limit is too low for a particular source and destination. You can customize these settings by clicking on the Advanced Settings button in CCC's main window. 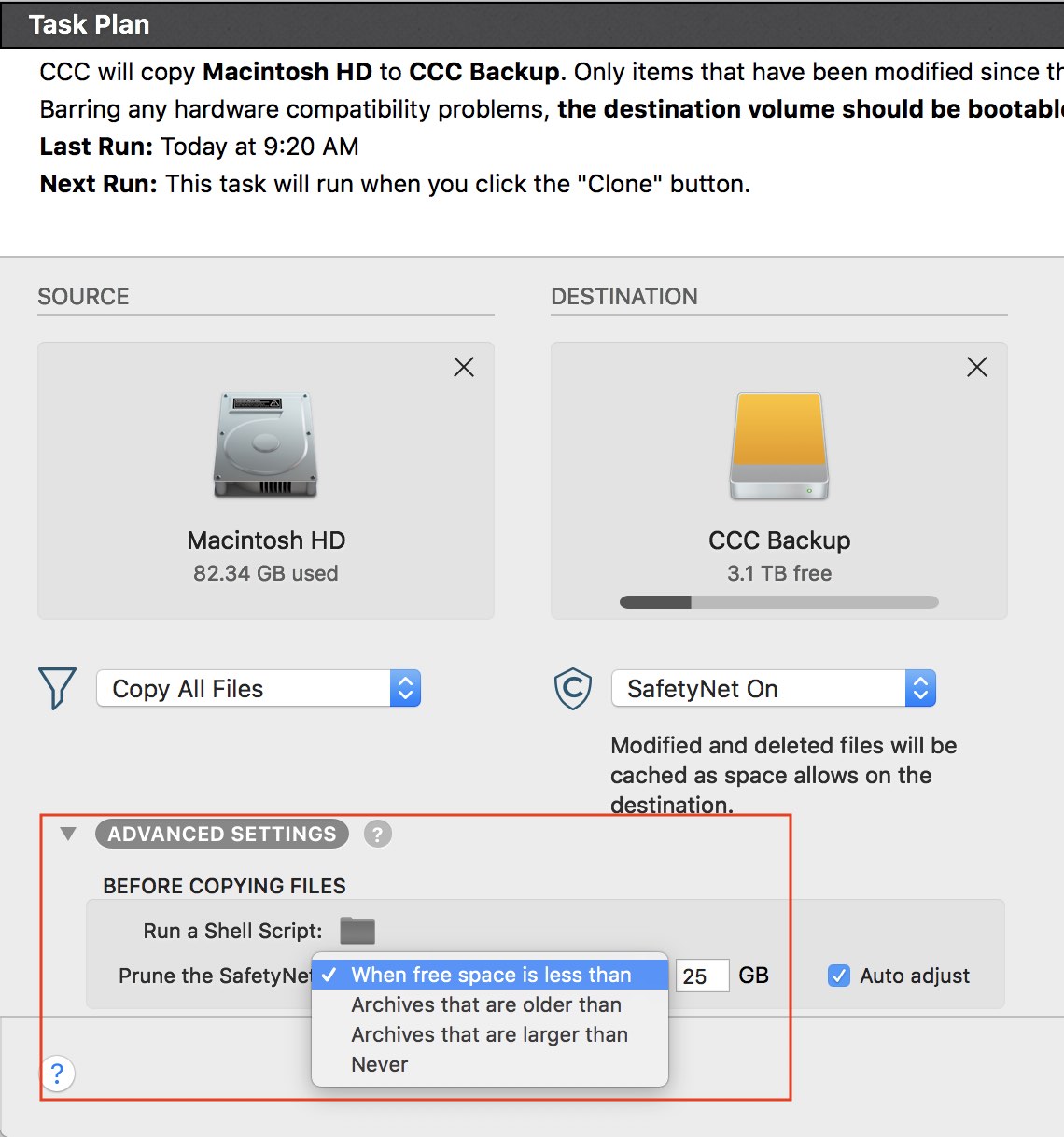 SafetyNet pruning occurs at the beginning of a backup task, so CCC will never delete an item that was archived in the current backup task. Additionally, pruning is always limited to the contents of the _CCC SafetyNet folder that is at the root of the destination. CCC's pruner won't delete the current versions of files on your destination, nor anything outside of the scope of the CCC backup task. Lastly, archive pruning works at a macro level. If any portion of an archive pushes past the limit that you have imposed, the entire archive (e.g. the time-stamped folder) will be pruned.

If your destination volume has less free space than the limit that you have specified, CCC will prune the oldest archive. CCC will continue to prune the oldest archive until the requested amount of free space has been achieved. Note that if the archives cumulatively consume less space than the limit requested and the destination volume is full, CCC will prune all of the archives.

CCC will prune archives that were created more than "xx" days ago.

Never prune archives in the SafetyNet

CCC will not automatically prune the contents of the "_CCC SafetyNet" folder at the root of the destination. Archived files may eventually consume all of the free space on the destination, so you should periodically delete older archive folders to maintain enough free space for future backups. You may delete the contents of the SafetyNet folder without harm to the rest of your backup set.

"CCC is pruning my SafetyNet, but the disk is still pretty full at the end of the backup task"

The purpose of CCC's SafetyNet pruning is to make space for additional backups. CCC also avoids pruning items that were very recently archived — after all, it wouldn't make sense to archive an item on the destination, them immediately delete it. To accommodate both of these goals, CCC prunes archives within the SafetyNet before the backup task runs. Pruning the SafetyNet immediately before copying files gives a greater level of assurance that the requested amount of free space (for example) will be available for the current backup. Be sure to consider this detail when specifying your SafetyNet pruning settings. If you want to retain additional space on your backup volume beyond what is required for your CCC backups, specify more liberal limits (e.g. 100GB of free space rather than 25GB).

"Can I use the _CCC SafetyNet folder for long-term archiving of specific items?"

We don't recommend using the SafetyNet for long-term storage. CCC is configured to automatically prune the SafetyNet, by default, when free space on the destination is less than 25GB at the beginning of the backup task, and that limit may increase automatically. CCC doesn't consider whether items in the _CCC SafetyNet folder were placed there by CCC or another application, everything is considered safe to delete when the time is right. If you would like to maintain a permanent archive of items on your backup volume, outside of your CCC backup, we recommend that you create a specific folder for this purpose at the root level of your backup volume.

"I manually moved the _CCC SafetyNet folder to the Trash, but now I get an error when trying to empty the Trash"

When CCC backs up your startup disk, it runs with the privileges required to access system files that are not normally accessible to your account. Naturally, some of these files will be updated on the source, and subsequently archived on the destination. When you place these items in the Trash (by placing the _CCC SafetyNet folder in the Trash), and subsequently try to empty the Trash, the Finder typically requests that you authenticate to remove these files. Sometimes the Finder is having a bad day, though, and it simply reports the enlightening "-8003" error when you try to empty the Trash (or something equally obtuse). This error isn't defined or documented anywhere, but through trial and error, we have figured out that it simply means "I can't cope with your request to empty the Trash".

The solution is to avoid using the Finder to delete a CCC SafetyNet folder. Choose Delete a SafetyNet Folder from CCC's Utilities menu instead and use that interface to manually remove SafetyNet folders.