Sometimes time-based scheduling is insufficient to describe exactly how you want your tasks to run. CCC offers runtime conditions which allow you to restrict the running of your tasks under certain conditions when the task is normally scheduled to run. 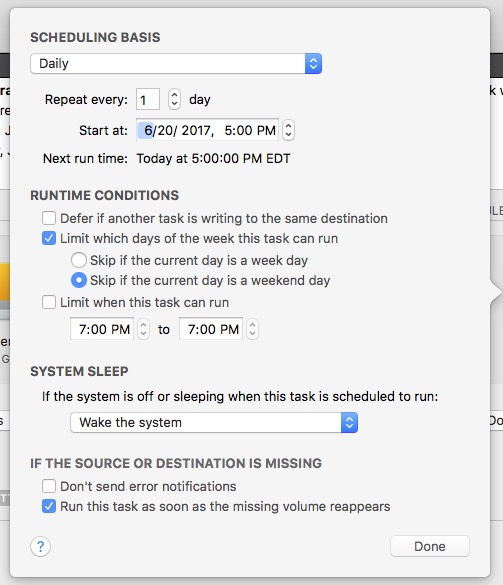 Defer if another task is writing to the same destination

If you have more than one scheduled task that writes to the same destination volume, you may want to configure the tasks to wait for one another such that only one task is writing to the volume at a time. When you configure a task with this setting and the scheduled run time elapses, CCC will place the task into a queue for deferred execution if another task is already writing to that same destination. Assuming another run time condition does not prevent it, CCC will run the deferred task as soon as the first task finishes writing to the shared destination volume.

Limit which days of the week this task can run

Limit when this task can run

This option allows you to limit a task to running during specific hours of the day. For example, if you don't want your hourly task to run in the afternoons, you could set a start limit of 6PM and an end limit of 12PM. This limit would allow the task to start any time after 6PM and any time up to 12PM, thus preventing the task from running between 12PM and 6PM. If the task is already running (e.g. if it started at 11:55AM), CCC will stop the task if it is still running when the end limit is reached.

Note: Set the task start time before you attempt to set time limits. CCC will not allow you to specify a time limit that does not contain the current start time of the task.

By default, CCC will wake your computer when your tasks are scheduled to run. You can change this setting in the Runtime Conditions section of the Scheduler popover. There are four options:

CCC will configure a wake event to wake the system shortly before the task runs, so the task should run on schedule. If the system is turned off, this wake event will not turn on the system.

Wake or power on the system

CCC will configure a wake or power on event to wake the system or turn it on shortly before the task runs, so the task should run on schedule.

Run this task when the system next wakes

Upon a wake notification, CCC will run the backup task if its scheduled run time has passed. The task will not run exactly when it is scheduled, though CCC can run tasks during macOS Dark Wake events (aka PowerNap, aka Maintenance Wake), which occur every couple hours. If you want your backup tasks to run in the middle of the night without turning on your display, this is the right option for you.

By default, CCC will report an error if the source or destination volume is unavailable when the task is scheduled to run. By enabling this option, CCC will suppress these errors. Additionally, if you have configured your task to send an email when errors occur, this option will suppress that email.

This option is not applicable for the When the source or destination is reconnected scheduling setting, because a task configured in that manner will only attempt to run if both the source and destination are present.

Run this task as soon as the missing volume reappears

If a backup task is missed because the source or destination was missing at the scheduled run time, this option will cause CCC to run the backup task as soon as that missing volume reappears.