Often when you have a backup task that runs on a scheduled basis, there are associated tasks that you would like to perform before or after files are actually copied. CCC offers the option to run shell scripts before and after a backup task, unmount or set the destination as the startup disk, run another CCC backup task, and power management options such as restart and shutdown. If you would like to perform any of these pre or post clone tasks, click the Advanced Settings button below CCC's Source selector. 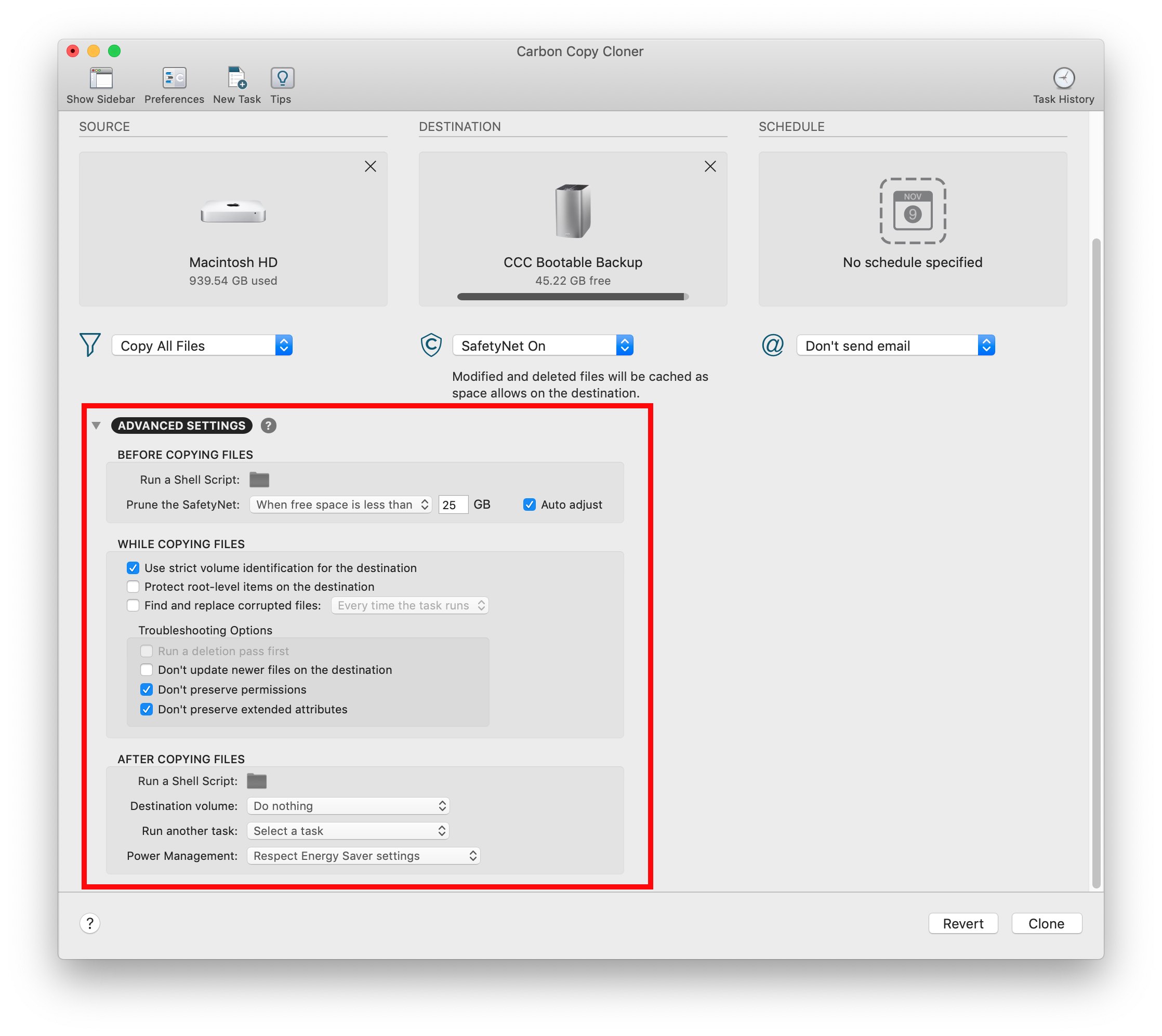 Without any additional configuration, CCC will attempt to mount your source and destination volumes before a backup task begins. This applies to many different volume types — ordinary volumes on locally-attached hard drives, disk images, network volumes, encrypted volumes – even encrypted volumes on remote Macs. If your source or destination volume is on a disk that is physically attached to your Mac (e.g. via Thunderbolt or USB), but it is not mounted, CCC can "see" that device and will attempt to mount it. If your source or destination is a network volume, CCC will obtain the credentials that you use to mount that device when you create the backup task, and will use those credentials to mount the volume before the task begins.

Little Snitch may prevent the automated mounting of network volumes

If you're using Little Snitch to monitor and filter your inbound and outbound network traffic, you may find that CCC has trouble automatically mounting a network volume. If you run into this problem, configure Little Snitch to allow network access to the NetAuthSysAgent system service. NetAuthSysAgent is the macOS system service that fulfills application requests to mount network volumes.

SafetyNet pruning is covered in more detail in this section of CCC's documentation.

If you have more than one CCC backup task configured, the other tasks will be listed in this popup menu. To create a task chain (e.g. to run tasks sequentially), simply choose one of these tasks to have that task run automatically after the current task finishes. Tasks run in this manner will start after the current task has finished completely. Chained tasks will run regardless of the exit status of a preceding task in the chain, e.g. if the first task reports errors or fails to run at all, the second task will still run. Only the first task in a chain needs to be scheduled to start the chain.

Note: Postflight tasks will not be started if the current task was started via a task group. When you run a task group, we're specifically aiming to run exactly the tasks within that task group, and within the order specified. If you run the task manually, however, or if the task is run separately from the group on its own schedule, then the task's postflight task will be run.

Post-clone shell scripts run after CCC has finished copying files and performing its own internal cleanup, but before unmounting any volumes.

The path to the destination disk image, if applicable.

if [ "$exitStatus" = "0" ]; then
# task succeeded
else
# task failed or reported errors
# Note: Do not assume that $source and $dest are populated
# These will be empty if source or destination validation fails
fi

CCC's pre and post clone shell scripts are executed as the System Administrator (aka "root"). As such, any references to your own shell environment will be invalid. When referencing tools that lie outside of the default $PATH, be sure to either specify the full path to the item (e.g. /usr/local/bin/foo), or export your own $PATH at the top of your script. Likewise, if you make relative references to files (e.g. ~/Desktop/foo.log), those files will be created in the root user account, e.g. /var/root/Desktop/foo.log. Use absolute paths for more reliable results.

To prevent unauthorized modifications to your shell scripts, we recommend that you restrict the ownership and permissions of these scripts and to the folder in which they are contained. The parent folder and scripts should be writable only by the root user. For example, running the following in the Terminal application would secure any shell scripts located in the default location for pre and post clone scripts:

After copying scripts into CCC's Scripts folder or making changes to those scripts, you can choose "Secure CCC's Scripts folder" from CCC's Utilities menu to correct any ownership or permissions concerns. Please note that these additional security requirements are only applied to scripts stored within the /Library/Application Support/com.bombich.ccc/Scripts folder. If you prefer to manage the security of your shell scripts on your own, you may store them in another location.

eject_source_and_destination.sh
CCC's option to automatically unmount the destination volume is a volume-level task, not a device task. It's also limited to the destination. If you want to eject the destination device, or if you want to unmount or eject the source, use this post clone script instead. Note that ejecting a device will unmount all volumes on the device. Also note that this example script adds a 60-second delay to accommodate macOS's desire to automatically regenerate various cache files. This delay can be adjusted if necessary by editing the script.