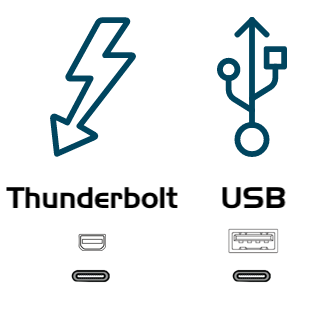 Many hard drive enclosures have USB or Thunderbolt or a combination of interfaces for connecting the hard drive to your computer. Any of these interfaces will work fine for backing up and safeguarding your data. We generally recommend purchasing an enclosure that offers multiple interface options (e.g. Thunderbolt+USB).

How big should the backup volume be?

We strongly recommend that you find the means to dedicate a volume to the task of backing up your irreplaceable data.

If you have data on your backup volume that exists nowhere else, it is not backed up! Whenever you specify a volume for use with CCC, there is a risk that some files will be removed for one legitimate reason or another. CCC offers options and warnings to protect your data from loss, but nothing can protect your data from a misuse of CCC or a misunderstanding of the functionality that it provides.

Most external storage devices will work just fine for your backups, however performance and reliability vary. It would be impossible for us to curate an exhaustive list of every device/Mac combination that does and does not work. However, we frequently get asked for a recommendation, so here's a list of some storage devices that we have tested with good results. Performance and price go hand-in-hand. USB-C equipped Macs can work well with a USB-C (USB 3.1) equipped storage device, especially if the storage media is solid state (i.e. SSD or NVMe, not "flash" drives, e.g. USB thumb drives).

These devices offer a moderate amount of storage and excellent performance. This is our top pick for a backup device:

† We do not recommend the Samsung T7 "Touch" model. The "touch" functionality uses a proprietary locking mechanism that requires Samsung drivers, and comes with a 27-34% price premium. This mechanism is not comparable to FileVault; CCC cannot automatically unlock these devices. The non-touch model provides the same functionality as far as a backup device is concerned, and can be encrypted easily in Disk Utility. In general, we do not recommend installing the third-party drivers or software that comes with an external storage device, we frequently see more trouble than benefit from that software.

USB 3.1, External Enclosure (without a disk)

Before purchasing any enclosure, be sure to check whether any known compatibility issues pertain to that device. We offer some general advice here, though, and a small collection of specific devices that are very popular, but deliver subpar performance.

Several years ago Seagate introduced Shingled Magnetic Recording to increase the storage capacity of rotational hard drives, but at the expense of writing performance. We anticipate considerably worse performance for APFS in particular on these devices. Many vendors have not been particularly forthright about the use of SMR in their devices until recently. Some† devices that leverage SMR include:

† This is far from an exhaustive list. None of these manufacturers documents whether the disks in their branded enclosures are using SMR. Due to this lack of transparency and based on experience with these devices, we recommend that you avoid branded external storage enclosures from Seagate and Western Digital. Please bear in mind that this recommendation is specific to the branded enclosures. Many Western Digital bare hard drives, for example, have excellent specs and we recommend them above.

These disks are cheap and can be acquired by the pallet at your local consumer warehouse. Unfortunately, APFS is not tuned to perform well on rotational disks, and that performance is really poor on these "slowest of the slow" rotational disks. The following disks are examples of these slower devices. These devices can be acceptable for use as a backup disk, but you should expect poorer performance from these cheaper devices:

If you have one of these devices you can format the device with Apple's legacy "Mac OS Extended, Journaled" format instead of APFS, and use it for data-only backups.

Despite being based on flash storage, which you'd think would be faster than rotational storage, USB thumb drives and SD cards are often quite slow. We don't recommend using these devices for backing up any substantive amount of data, and definitely not for creating a bootable copy of your startup disk.

We have received several reports that some Macs are unable to boot macOS Catalina from a Western Digital My Passport enclosure.

NAS devices are very trendy these days; many people find the convenience of a wireless backup to be alluring. Based on user feedback, however, we discourage people from relying on NAS devices for their primary backup for several reasons:

For primary backups, we recommend that you procure a USB or Thunderbolt hard drive and create a backup on that locally-attached disk.

NAS devices that we specifically do not recommend

Western Digital MyCloud Home: The "Home" model of this NAS device requires the use of WD-proprietary software to access the storage securely; direct access to the storage via SMB is only available with Guest privileges. Users report that performance of the storage while using WD's software is subpar in comparison to Guest access via SMB, and other users have reported to us that macOS is unable to create or mount disk images on the storage when mounted via Western Digital's software.

Last updated 18 November 2022
Tags:
Getting Ready to Use CCC